Translated from German into English by Erich Petricevic, State-examined Translator

Airbus Defence and Space GmbH is currently developing an enhancement to the Electromagnetic Levitator (EML) on behalf of the European Space Agency. This is a unit used for carrying out scientific materials experiments and part of the laboratory equipment on the International Space Station (ISS).

The EML system was developed by Airbus Defence and Space on behalf of the European Space Agency (ESA) (2) and the space agency (1) of the German Aerospace Center (Deutsches Zentrum für Luft- und Raumfahrt - DLR). The EML is controlled and monitored by the DLR Microgravity User Support Center (MUSC) in Cologne. Since its implementation, the EML unit has produced valuable results in the field of materials science research and will continue to be supported by the contracting authorities ESA and DLR in the future; further functionalities are planned.

The EML facility, weighing 360 kg, is part of the Columbus module aboard the International Space Station and was taken to the ISS in 2014 on ATV-5 (Automated Transfer Vehicle) “Georges Lemaître”, an unmanned supply ship. On the ISS, Alexander Gerst installed and put the unit in operation. He was also involved in processing samples.

The contract with the European Space Agency (2) also includes the planned addition to the EML of a device for the measuring and exactly defined setting of partial oxygen pressure (EML OCS – EML Oxygen sensing and Control System), which is scheduled to be put into service in 2023. This will enable additional measurements of materials in a specifically adjustable oxygen atmosphere.

In close collaboration with Airbus Defence and Space, METROTEC has developed a prototype for the planned OCS, an open- and closed-loop controlled gas generator, as well as the oxygen sensors. This prototype is to verify and validate parts selection and functionality in order to subsequently build an airworthy version based on the findings gained.

The gas generator (OCS) continually supplies the generated gas mixture to the experimental module (EML), in which the laboratory tests are to take place, by means of a closed loop.

The vacuum-proof ceramic (YSZ) of the oxygen ionic pump separates the atmosphere of the closed gas loop from the surrounding ambient air. (cf. Figure 3). Oxygen ions are conveyed through the ceramic wall by means of electric energy, thereby either oxygenating or deoxygenating the gas cycle. This version of the generator moves up to 8 ml/h pure oxygen. This amount is sufficient, for example, to set carrier gases consisting of nitrogen, argon or helium via the oxygen ionic pump to a target value defining the oxygen partial pressure of the ISS OCS that can be determined by the ground station. The project specification states that an oxygen partial pressure of 10-3 bar to 10-20 bar must be achieved. The control task, which is characterised by extremely different behaviours of the control section, was solved by employing control parameter sets taking effect subject to the current target value.

The oxygen measurement ( - see Figure 3: “Signal”) records the oxygen partial pressure generated and directs it to the oxygen ionic pump (- see Figure 3: “Power for ionic pump“). As shown above, the resulting gas mixture is supplied to the test module (EML) in which a number of laboratory tests are carried out in a zero-gravity environment under defined and constant oxygen partial pressures.

Principle of an oxygen generator

For the presentation and calculation of an oxygen partial pressure covering several orders of magnitude, we chose a logarithmic presentation. (Source: METROTEC) 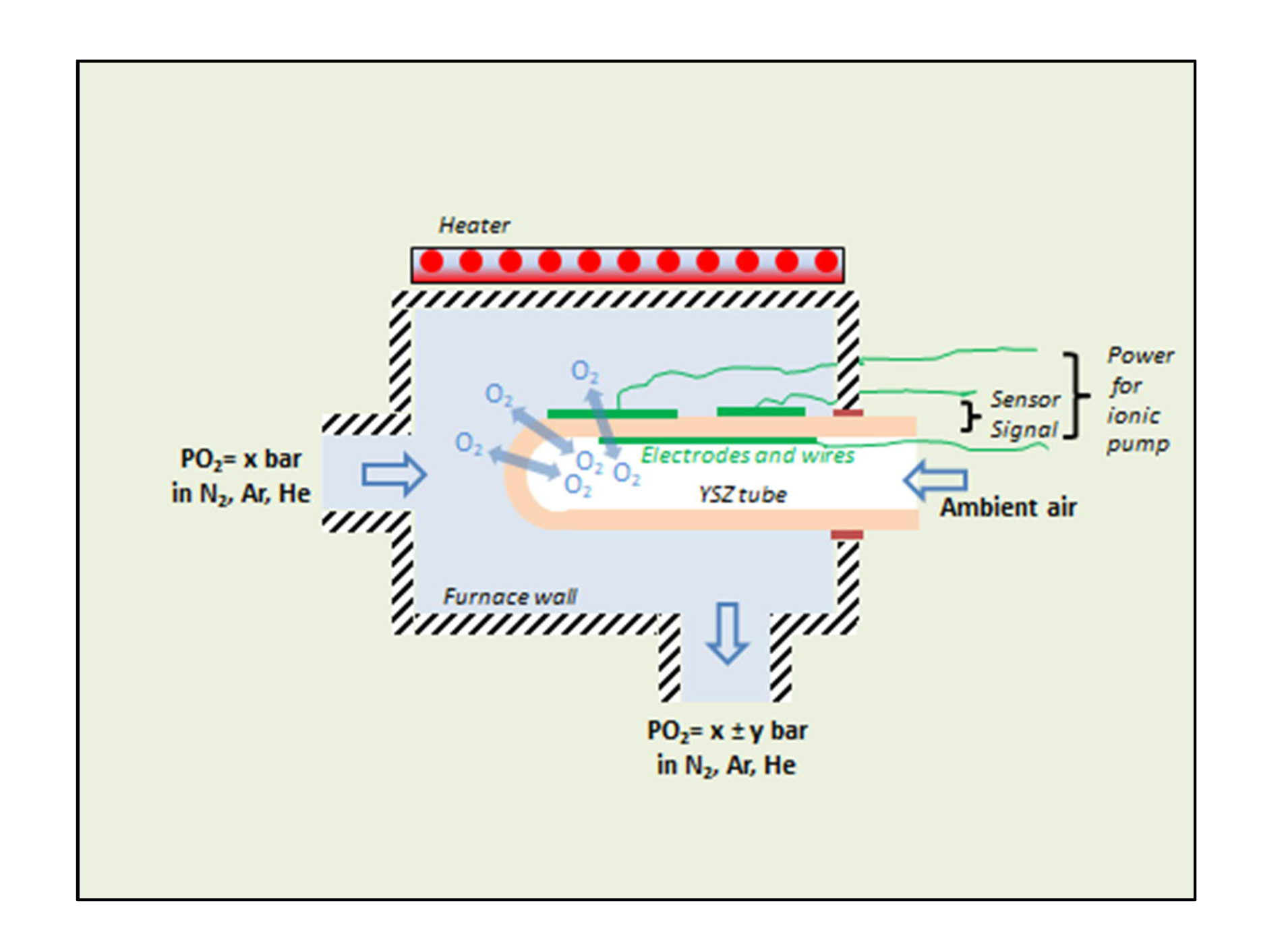 Control of the Oxygen Partial Pressure

Example of a test run in which the oxygen partial pressure is controlled applying a number of target values. (Source: METROTEC) 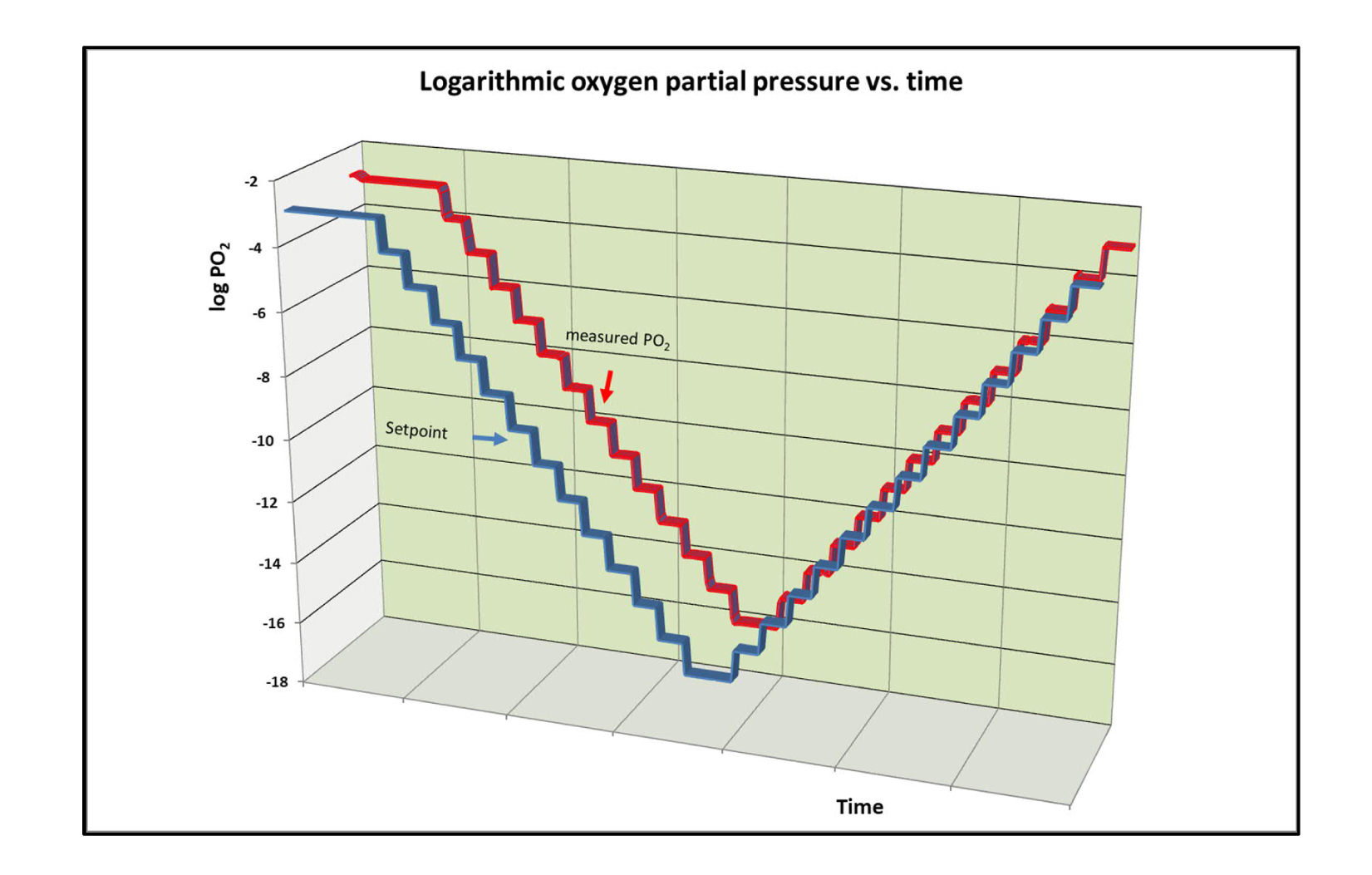 This project enabled METROTEC to use and expand its extensive experience, in particular in connection with oxygen ionic pumps for industrial and research applications.